Spanish vs. Portuguese: Why You Need To Localize In The Right Language 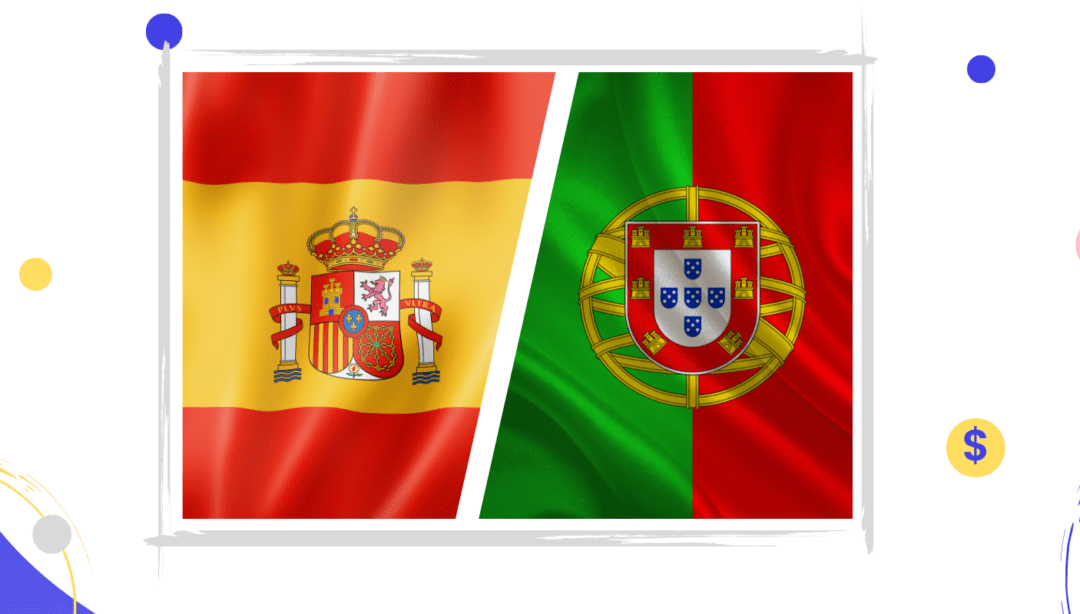 Spanish vs. Portuguese: Why You Need To Localize In The Right Language

When localizing for the European market (Spain and Portugal) or for Latin America (Brazil and Mexico), you might think that due to the similarities between Spanish and Portuguese, both languages are the same, and it would be enough to translate and localize your game in just one of them. The truth, however, is that when speaking about Spanish vs. Portuguese, this is not quite possible. But it’s also not that black and white.

You should know that yes, there is a wide number of similarities between them, many enough to make people from those two countries somehow understand each other. Still, a Spanish-speaking person is far away from being fluent in Portuguese, and vice versa, if they don’t study the language.

Therefore, when thinking to target the Spanish market and the Portuguese market, you must know that you have to translate and localize your game for each of them. This is the best solution for providing a great experience to players, gaining their hearts, and making them engage with your game. After all, those are two different countries with two different languages.

How it all started

One of the main questions we’ve heard many times was “If Spanish and Portuguese are two different languages, why are they so similar?”

Well, this is because, from the historic and linguistic points of view, they have the same origin. Together with other languages, such as French, Italian, Catalan, Spanish, and Portuguese derived from “Vulgar Latin”. More specifically, these languages fall in the category of the Ibero-Romance languages. This means that they developed in the geographic region of the Iberian Peninsula. 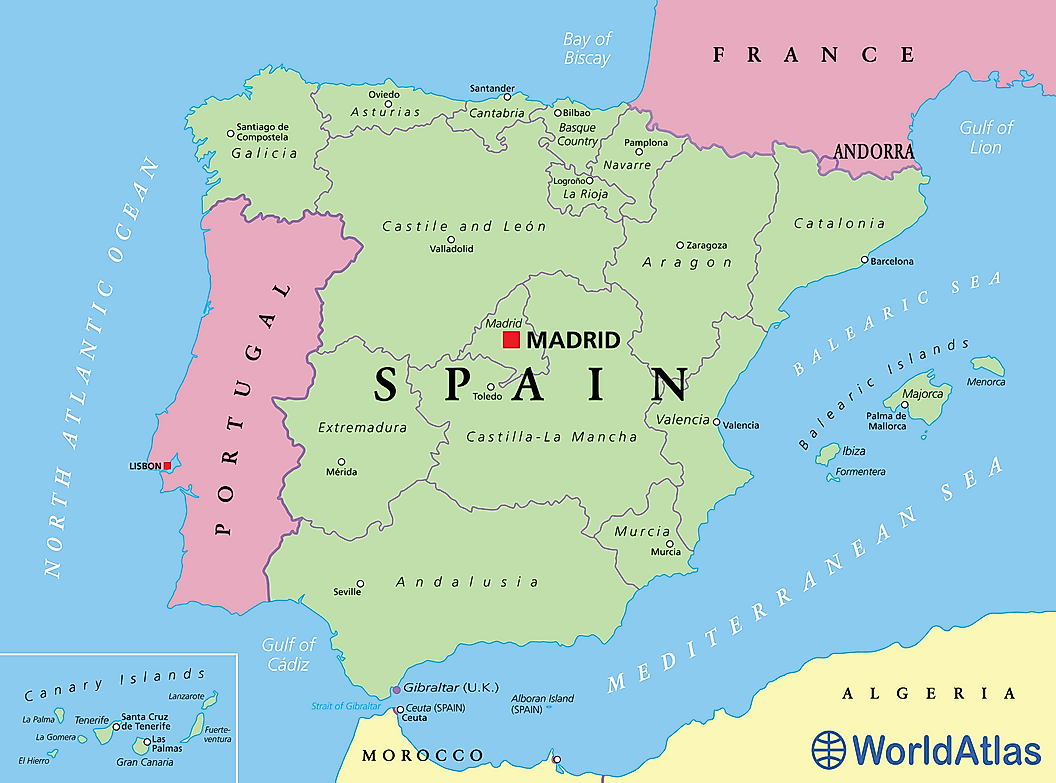 To understand this, we need to make a short overview and start by going back to ancient times. “Vulgar Latin” is the nonstandard form of the Latin language spoken by soldiers and merchants throughout the Roman Empire

The original Latin speakers were the people responsible for bringing the peninsula to Rome. Then, they dominated the region for almost 600 years.

But not just the Roman Empire is responsible for the similarities between Portuguese and Spanish. And geographically, Spain and Portugal are near each other and, in a way, kind of isolated from the rest of Europe. Therefore, it’s no wonder how these two languages developed so much alike even after Rome’s domination.

Spanish was mostly influenced by the Arab conquest of the island in the 8th century. After this, started a process called by historian “Reconquista”. For centuries after that, the Spaniards and the Portuguese tried to eliminate the Arab domination and finally succeeded in 1492. The Portuguese language suffered less from this influence, so you’ll find fewer Arabian words there, but it was more influenced by French and Catalan. Nowadays, both languages are widely spoken and have multiple variants and dialects. With 534 million speakers (460 million native and 74 million non-native speakers) worldwide, Spanish is the 4th spoken language across the globe, while Portuguese ranks the #9, with 234 million speakers (221 native and 13 non-native speakers). 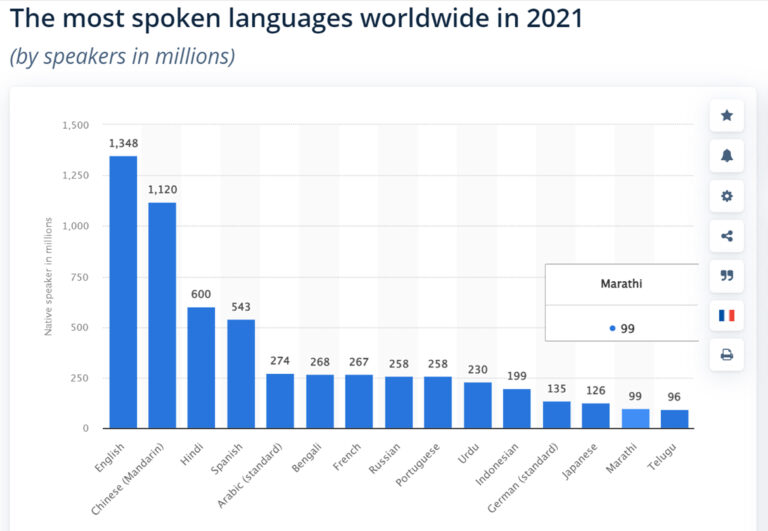 Therefore, localizing your mobile or video game in those two languages opens the doors to a large market.

But how different are Spanish and Portuguese? And which are their similarities? Let’s see.

When talking from the lexical point of view, Spanish and Portuguese have around 90% of similarities. That means that 9 out of 10 words are similar and have a cognate in the other language (words that look and sound similar in both languages because of a common origin).

Now, let’s take a look at this list of common, everyday words: 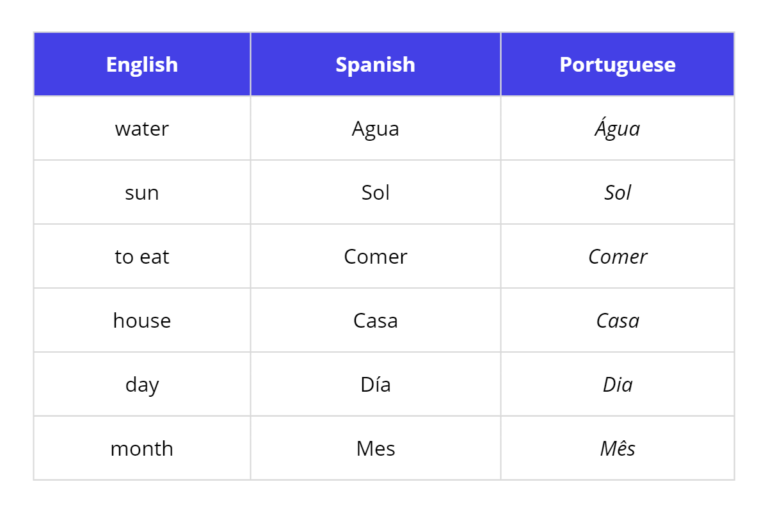 Except for some minor changes in accents, you can’t deny there is a strong resemblance. Also, in terms of grammar, the conjugation system follows the same logic and declinations.

Spanish vs Portuguese: what are the differences?

Despite the close relationship between those two languages, there are important Spanish and Portuguese differences, too.

The most notable differences in Spanish vs. Portuguese are in pronunciation and syntax. Therefore, the spoken forms of two similar languages differ more than the written ones and are less intelligible to each other.

You’ll not find in Spanish the Portuguese letters “ã” and “ç”. And unlike Spanish, Portuguese doesn’t have “ñ”, the Portuguese equivalent being “nh.” Like, for example, señora/Senhora.

Sometimes, a word in Portuguese that ends in “-ão” will end in “-ón” in Spanish. Here are some examples:

Unlike Spanish, where the words are more deliberate, Portuguese is a very fluid language with a lot of slurred sounds. You’ll find also differences in terms of vowels: Portuguese has 9 vowel sounds, while Spanish has just 5 and you’ll not find the vowels with a nasal sound.

You also have to know that compared to Spanish, Portuguese includes many extra sounds and has much more complex phonology. This is the one reason for which Portuguese speakers have an easier understanding of spoken Spanish than vice versa.

False Friends as the difference between Spanish vs. Portuguese

Even if Spanish and Portuguese share a lot of cognates (words from different languages that look and sound similar and even share the same meaning), they also share a lot of false cognates or “false friends” (words that look and sound the same but have different meanings). Sometimes, using a false cognate is just funny, while at other times it can turn an innocent sentence into an offensive one. 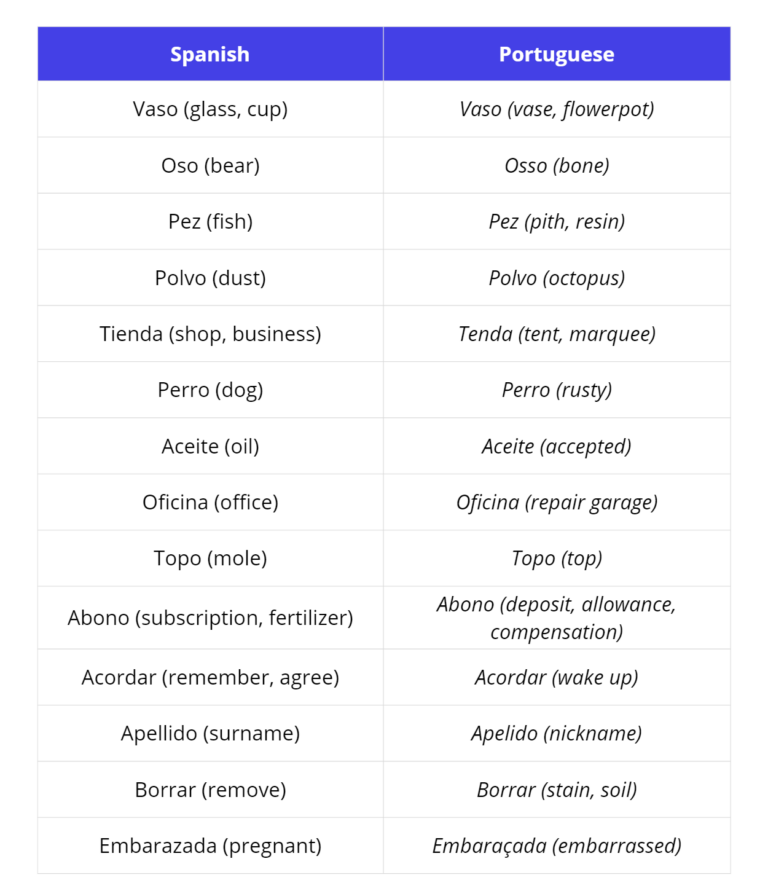 In Portuguese, interrogative pronouns do not have accent marks. In Spanish, they do (quién, por qué, qué, cuándo, cuál).

As you can see, unlike in Spanish, there’s no question mark at the beginning of the question in Portuguese. They are omitted, as are initial exclamation marks.

In addition to lexical differences, Spanish and Portuguese grammar, although similar, have many differences. Thus, it cannot be said that the speakers of one of the two languages (no matter what it is) can easily speak the other.

The Spanish language has three forms for singular definite articles:

And it also has three corresponding third-person pronouns:

Portuguese has only two forms in both cases.

Some words that are masculine in Spanish are feminine in Portuguese and vice versa: 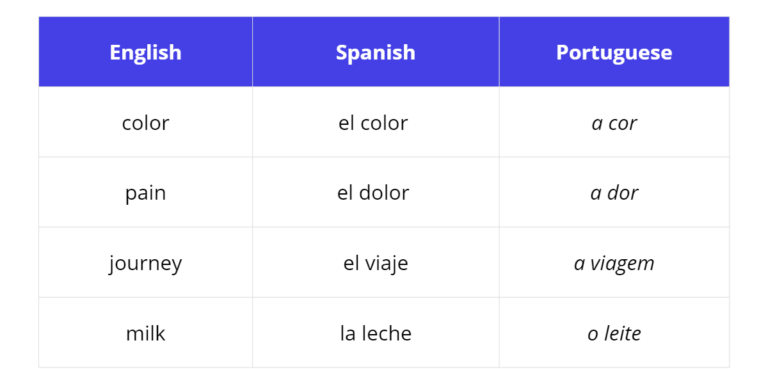 Here are four additional major differences between the two languages you should not overlook:

Spain has more distinct regional differences than Portugal. The regional languages are Castilian, Basque, Andaluz, Galician, and Catalan. In Portugal, the language is the same, even if the accents are different between the north and south of the mainland.

The biggest differences in European Portuguese are those between the islands and the mainland. Furthermore, you might find that it’s easier for Portuguese and Galicians to communicate in their respective languages than it is for a Portuguese to talk with a Spanish person from another region.

Spanish vs Portuguese: wrap it up

There is no doubt that Spanish and Portuguese share the same linguistic roots and, although they have had different influences throughout history, they have much in common. Both much of the vocabulary and many of the grammar rules are similar.

However, when talking about Spanish vs. Portuguese, you must note that there are many differences between the two languages that make them distinct. Therefore, when addressing Spanish and Portuguese audiences, you consider the characteristics and uniqueness of each language and localize your game differently.